Becoming a vlogger is not an easy task. To do this, it is not at all necessary to be hung from head to toe with all kinds of equipment. An ordinary smartphone will do just fine with shooting videos on YouTube and conducting video broadcasts on social networks. It can be used to get the smoothest picture without jerks and tremors in conjunction with manual image stabilizers. Fortunately, many of the steadicams have now been adapted to work in conjunction with mobile gadgets. 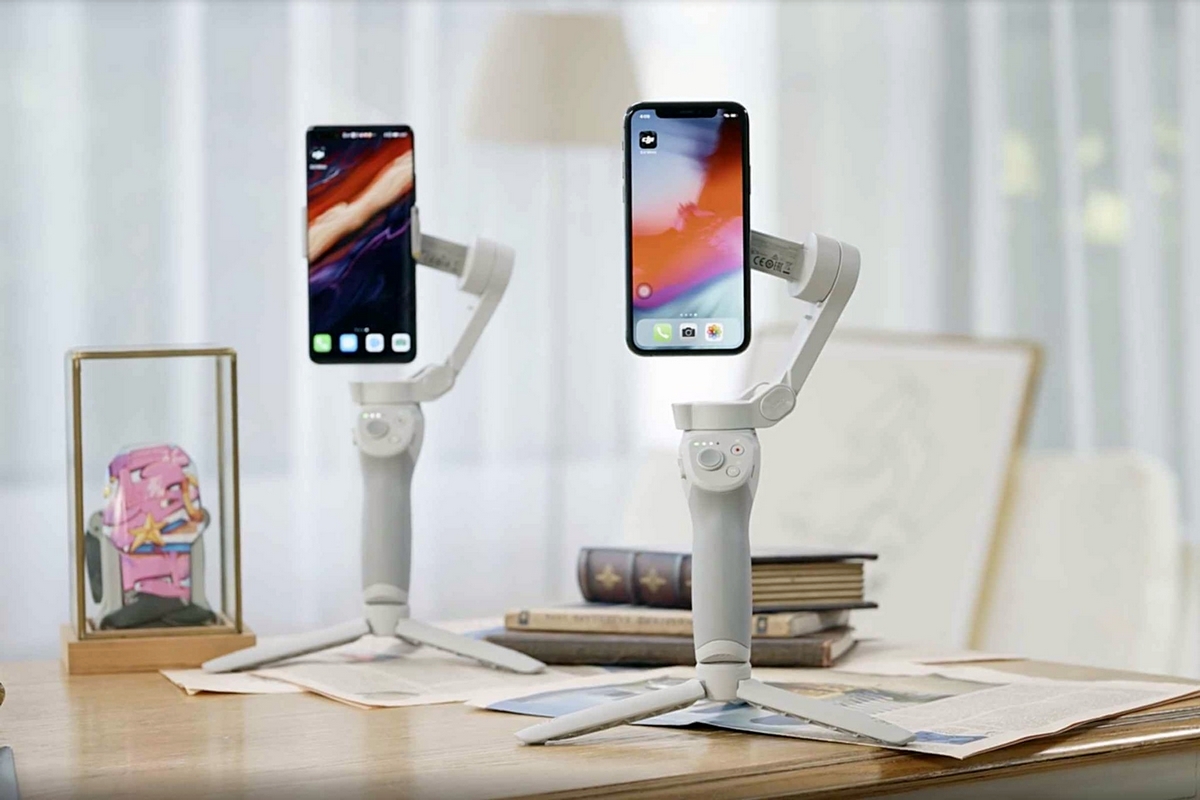 Visual differences between the models from the review are given in the comparative table of technical parameters of smartphone stabilizers. The full range of steadicam offers is presented in the catalog section of the same name.

Having reached certain heights, the evolution of smartphone Steadicams for some reason went backwards. So, in FeiYu Tech Vimble One, stabilization is performed on only one horizontal axis. But even a child can master it.

The device has a sliding design in the manner of that of traditional selfie tripods. When folded, its dimensions are 130x63x58 mm, unfolded - 241x68x52 mm. The ins and outs of the model are given out by a button control panel on the handle with zoom keys, turning on the stabilizer and quickly flipping the smartphone from landscape to portrait. The FeiYu Tech Vimble One can carry phones up to 89mm wide.

Through the FeiYu ON mobile application, the user has the right to control the device with gestures, shoot time-lapses and videos in slow motion. With a smartphone, the device keeps in touch via a Bluetooth wireless network. FeiYu Tech Vimble One can easily control the on-board camera functions of most mobile phones directly.

A battery with a capacity of 800 mAh holds the gimbal for about 6 hours of continuous operation. Those. the smartphone is more likely to be discharged than the energy reserves in the battery tanks of the mobile steadicam will run out. Well, an additional weighty argument in favor of the model is the affordable pricing policy for the product. 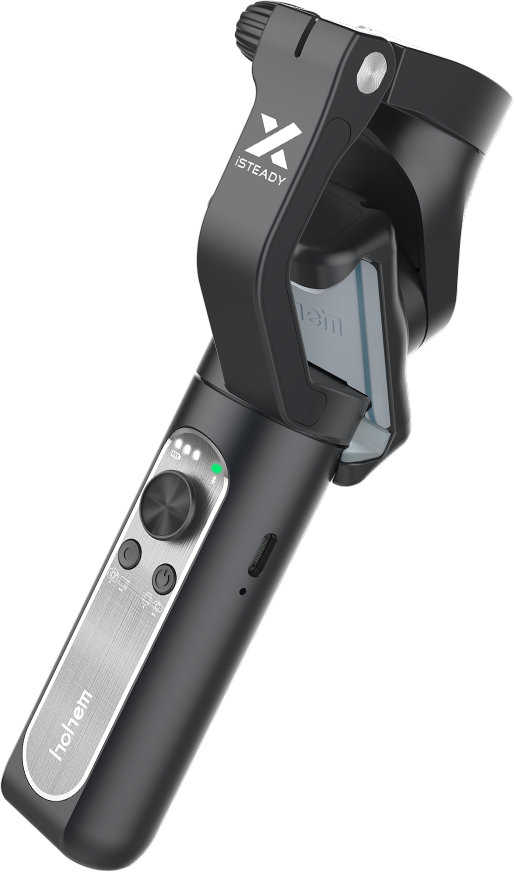 Hohem iSteady X has a good chance of success in the mobile image stabilizer category. The “recipe” for its preparation is formed by adding a practical smartphone holder, an effective stabilization system and a functional mobile application to the “dish”. But first things first.

The model has a compact folding design and easily fits into the office of a city backpack or women's handbag. With its own weight of 259 g, the stub confidently holds heavyweight smartphones - the “carrying capacity” of the steadicam reaches 280 g. Wide and deep claws are provided to fix the mobile phone in the “nest”. So “undressing” the smartphone from the case before installing it in the gimbal is usually not required.

The device is controlled, like its colleagues in the shop, with a joystick, two buttons and a zoom slider on the handle. You can unleash the full potential of the stabilizer in conjunction with the Hohem Pro mobile application for Android devices and Apple mobile phones on iOS. Only in the programme is it possible to turn on the sports mode, shoot panoramas and time-lapses, track objects, etc.

The steadicam is paired with a smartphone via Bluetooth. The gimbal receives power from a built-in 2000 mAh battery with a claimed autonomy of up to 8 hours. In addition to the device, there is a tripod stand and a small weight for balancing the phone in the "socket". Of the minuses, users note only the unstable operation of the Android version of the smartphone application. However, this is fixable at the software level in subsequent firmware of the mobile programme.

+4 video
+5 photo
BASEUS Handheld Gimbal Stabilizer
Many shooting modes, automatic tracking of the object in the frame, zoom ring, comfortable grip in the hand, long autonomy.
There are no significant downsides.
Price from 3 900 ₴

The Chinese brand of consumer electronics BASEUS is known in domestic spaces thanks to mobile accessories and all kinds of gadgets from the category of car accessories. The brand's first foray into mobile image stabilization is the 3-axis Handheld Gimbal Stabilizer.

The main purpose of the steadicam is to reduce shaking and jerking when shooting video on a mobile phone camera. The device reacts to every movement of the operator and keeps the fixed smartphone in a level position, ensuring smooth video shooting on the go. The "ears" of the gimbal tenaciously hold gadgets with a body width of 58 to 92 mm.

The comfortable grip of the stabilizer in your hand allows you to fully concentrate on recording video without fatigue during prolonged use. The pluses of the model also include a joystick for rotating a fixed smartphone and a side zoom wheel. Without recharging, the device can be operated for up to 12 hours in a row - a powerful battery with a capacity of 2200 mAh affects.

In order to taste all the delights of the stub, you will need to download the BaseusControl mobile application to your phone. In it, you can activate the automatic tracking mode for an object in the frame, use the Dolly Zoom sharp zoom effect, shoot panoramas and time-lapses. In general, this is not a useless toy for one day, but a completely original device that will benefit mobile videographers.

+25 video
+18 photo
Zhiyun Smooth-XS
A convenient telescopic handle, a tripod stand, a quick turn of the smartphone from portrait to landscape orientation, a functional mobile application.
Not so long battery life in comparison with peers.

The Zhiyun Smooth-XS two-axis steadicam is designed for smartphones with a case width up to 90 mm. Basically, it is a practical selfie stick with image stabilization for smooth videos on your mobile phone.

The model is made in a compact form factor with folded dimensions of 69x56x267 mm. Its body is entirely made of plastic. As a result, the steadicam weighs only 249 g. The handle of the device fits comfortably in the hand, for which special recesses and a rubberized insert are provided. The design of the handle is telescopic - if necessary, it extends by 26 cm. The smartphone itself is placed in the grooves of the slider pad with a contact group. When unfolding the shoulder, be sure to bring it to a click or stop so that the contact group coincides with the contacts on the handle.

The controls on the steadicam handle are placed under the thumb of the right hand. On the front there is a joystick for rotating the “head” with a smartphone, an “M” button for quickly flipping the phone from landscape to portrait orientation and vice versa, and a video recording start button. On the left side you can see the zoom slider. A tripod stand is attached to the bottom of the steadicam handle. Also, the thread at the bottom is suitable for installing the stabilizer on a classic tripod.

An extended list of options for interacting with the steadicam is opened from the ZY Cami mobile application. It has manual ISO settings, exposure and exposure compensation, facial skin beautification effects, a gesture tracking system, panning modes, time-lapse and hyperlapse shooting, and live broadcasts on popular video hosting sites. Another notable mode is SMART. It can automatically create ready-made short videos with editing and music according to preset templates.

The battery on board the model is non-replaceable, and its capacity is exactly 1000 mAh. The battery charge lasts up to 5.5 hours of uninterrupted operation. The lighter the smartphone and the more accurate the balancing, the longer the device will work on a single charge. Although, in comparison with peers, Zhiyun Smooth-XS still loses in terms of battery life.

DJI is famous not only for its aircrafts. This is also the guru of image stabilization systems. "Adult" brand steadicams are used by professional photographers and videographers. The mobile division of gimbals does not lag behind them.

In 2020, the DJI line of mobile stabilizers was replenished with the Osmo Mobile 4 model. Its main task is to stabilize the smartphone camera while moving in space. At the same time , the device opens up a number of other creative possibilities: it tracks objects in the frame (Active Track 3.0 technology), allows you to take interval shooting, is suitable for creating short video clips, and makes great panoramas. All this goodness is available in the DJI Mimo mobile app.

The DJI OM4 has three buttons, a four-way joystick, and a zoom rocker. A joystick with adjustable reaction speed is responsible for turning the smartphone along two axes, the power button responds to the number of clicks (two taps - flip to portrait mode, three clicks - switch to standby mode, etc.). Also on the handle there is a separate trigger for switching between smartphone cameras or turning on the tracking mode for an object in the frame.

The key difference between the 4th version of the mobile gimbal and its predecessors is a magnetic platform for attaching a smartphone. The device comes with two mating parts: with spring-loaded retractable brackets to hold the “mobile phone” case, the second is a sticker on the case. At the same time, the steadicam is equipped with a mini-tripod. Finally, another strong feature of the model is its long autonomy (up to 15 hours of operation without recharging). Investing in DJI OM4 is more than justified by the advanced functional qualities of the stabilizer and its advanced ergonomics.